A little video about the new Zeno 2 from OZONE. My videos are mainly for entertaining but will show in some way the potential of a certain glider. After more than 15 hours, here is a 15 mn video.

Wind Off The Ocean OZONE Zeno 2  MS
Introduction:
And here it is after five years.  The Zeno 1 was an eye-opener as every pilot who flew it knows. In that era, there was no competition in the 2 liner series for that special package of outstanding performance and comfortable ride. In this test, I will try to compare the Zeno 2 with the new Magus XC, Peak5, Zeolite GT, Omega X-Alps 3, Leopard, XC racer.
History:  I must add that in the 90’s I was still very much interested in competition gliders, and have flown a lot of them, from the early UP’s, EDEL, Airwave, MAC PARA, some hours on the fast XXX at the time, the Sector era, and many more that I can’t recall all of them.
Those machines were difficult to manage in strong air. The main problem at the time besides the weak internal structure was the reduced authority on the brakes! I would find myself sometimes in strong air a passenger underneath and waiting for that machine to settle or to pass that heavy turbulence. They were very slow to enter the airmass comparing them to the new generation B’s of today!
Finally, I felt that the easiest competition glider to fly for the competent pilot is the authority on the brakes and how precisely a pilot could steer it in turbulence, and how much that competition glider can stay connected to the pilot’s input in the heavy stuff. IN other words, how to keep it open, and that has lots of importance IMHO to rate the easiness of a comp glider that is intended for the required level of pilots.
Nowadays, the inserted rods from the leading to the trailing edge stiffened the glider, making them very solid, but another challenge arises, to control the energy that the glider produced in strong air, or especially after collapses.
Testing the Zeno 2:
I flew the Zeno 2 with my good old Woody X-rated 6 that I use on 90 % of the gliders I test fly. Ideal chest strap for the Zeno 2 MS to stay homogenous in turns and feel better the air is 48 cm between carabiners on the X rated 6.
Launching:
In nil wind, a steady pull on the A’s will launch the Zeno 2 easily. It resembles the Zeno 1 inflation, but it feels more compact and balanced as it fills with air. After the first 50 % rise, the Zeno 2 accelerates a bit and it is better to ease up the pull for a smooth take-off.  Overall it is a very easy glider to inflate for a 2-liner.  It is not very far from the Mantra 7 in inflation.  The only problem with 2 liner and long rods are when the wind gets underneath the trailing edge and lifts it.
In the air:
I flew the Zeno 2 MS from 92 to 99, and later I felt that around 94, 96 is the best option to go for overall performance management.  The older Zeno1 was best flown at 97, but I think the Zeno 2 supports better with less weight still feeling homogenous and solid.  The Zeno 2 MS at 95 has a slight pitch forward when entering thermals. The Zeno 1 after 20 hours would feel like a slight pitch back but with enough efficiency to climb like hell. The Zeno 2 now around 15 hours, seems to have a slight forward pitch and straight into the climb. It seems as talkative as the Zeno 1 if properly loaded.  The inner structure of the Zeno 2 feels very solid and homogenous than the Zeno 1 had.
In stronger air and punchier conditions, the Zeno 2 needs slightly more active pilot control than the Zeno 1.  At 40 % of bar travel, and flying in moderate turbulence it felt quite easy to keep on track and control with the B steering.  But when pressing more than 60 % till the full bar, I felt that it becomes more delicate and sensitive in turbulence. That’s why I felt a seated harness would be great to lock yourself inside.
Will talk about it later on in this test.

The Peak 5 I tested earlier, has longer brake travel and less authority than the Zeno 2, and of course, the B steering was very light, and as I wrote it was a bit difficult to feel the glider when on bar.
The Peak 5 needs more active pilot control than the Zeno 2 in all conditions. The Zeno 2 B steering is firmer more contact and better control, and the brakes are shorter and more direct.
The Magus XC and the Leopard seem to share the same comfort as the Zeno 2. The Magus XC  pleasant handling is quite similar to the Zeno 2 with the ability to core slightly narrower than the Zeno 2 and a more linear response through the brakes for the Magus with the ability to readjust the turning radius in turbulent air.
The Flow XC Racer authority on the brakes seems to be also more linear and direct. It felt also easier to fly.

On some days I felt that I was able to core every bubble efficiently on the Zeno 2, and on some other days, with turbulent disorganized cores, the Zeno 2 tends to get leveled and implying brakes and weight shift to keep it at course inside the thermal was better especially at 96 on the MS. In any other 5,6 m’s homogenous thermal, the turning radius is easily kept and the climb is faster than any 3 liners, and even some 2 liners.  I was able to feel, and control the Zeno 2 movements and place it 80 % of the times where I wanted it in the air.  That’s the reason I find it a bit easier to turn than the Leopard and quite similar to the Magus XC. In stronger air, the Omega X Alps 3 is more manageable as it doesn’t jump away much overhead.

There’s very slight feedback from the brakes on the Zeno 2 which wasn’t available on the Zeno1, but not, much… The internal structure of the Zeno 2 felt more compact and more solid than the Zeno 1 span-wise. The tips however on the Zeno 2 are very slightly softer than the Zeno 1 but still very solid…In all the flying hours I had a couple of tip collapses…so nothing to mention here…
I personally believe that’s a positive behavior for a glider that is very solid in the middle and collapse a bit on the extremities.
When flying a very solid glider all the way, I get worried about its collapsing or when it will collapse. Better to be informed by the tips!
Finally, the Zeno 2 at trim speed and at 55 Km’h (half bar) needs maybe 30 % more active pilot control than the Mantra 7 MS.
Doing some glides with a Mantra LM7, in moderate to calm air, same size and load as the Zeno 2, showed me on several occasions a very small edge of glide at trim speed. The full bar of the LM7 matches half bar on the Zeno 2, with a slightly superior glide in calm air also, But when conditions began to get windy and tricky, the Zeno 2 gets quickly in front and higher as it excels in lift lines with a profile that gets higher and moving forward much better. 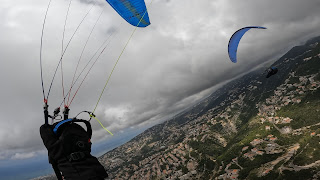 Doing some glides with a Flow XC racer 80-95, the same load as the Z2, showed me a better glide for the Z2 at trim and at bar. The climb however is weak was on the XC racer side. In strong climbs, they both look similar.
At half and full speed, I felt that the Zeno 2 requires a seaboard harness that locks you in place and steady, as it will require much more pilot control. The XC racer felt easier to handle.
The leading edge shows some crisps but is still tough. I think it requires keen attention when gliding in moving air at full bar. Or should I say, it is better not to use the full speed often unless you need to go that fast!
The B steering is efficient at half bar and can control almost 80 % of the glider movements. A bit less efficient than the Zeolite GT. It has a moderate pressure, comfortable for long glides, but the pressure tends to spread till the tips and is probably slightly delayed over the Zeolite GT, which can be promptly maintained through the B risers.

In moderate thermals, I was enjoying steering with the B controls in a thermal and I could get the Zeno 2 to get some cores using the B risers.

I had a tip from Luc for weak thermal climbing, and it worked!  Steering with the inside brakes on one side, but holding the B control from the outside (no brakes touching). I noticed a better float ability in weak thermals! Try it! What i liked most is the way that the Zeno 2 penetrates the airmass with a positive efficiency to move forward. It felt like a hungry grasshopper that inhales what’s in front of him…that’s the best way to describe it 🙂  It is a fast glider at trim in that matter, and even more if you load it at 100!  But I think you will only need it when the day is very generous and strong and you are aiming to win the competition by a margin!
So, in very weak thermals, (0.2 m/s) I felt that the Zeno 1 (reference in that matter), Leopard, and the Magus XC could be slightly floatier if all are similarly loaded! That’s why getting the Zeno 2 MS at 95 won’t alter the behavior in strong air, but will probably favor a bit the climb in very weak conditions.
When flying my LM7 next to the Zeno 2 in a very weak lift I felt the LM7 was floatier.
Later when a dominant north wind was facing us, and even in a light lift, the Zeno 2 could get inside and get the lift much better.
The handling and the brake are shorter to react than the Zeno 1, similar to the Omega X alps3 and the Leopard but without being as linear.  From the two liners i tested, the Magus XC and the Flow XC racer can make an even narrower radius with a linear response.
The Zeno 2 handling enables it to narrow the turning radius more than the Zeno 1 can (In homogenous cores) 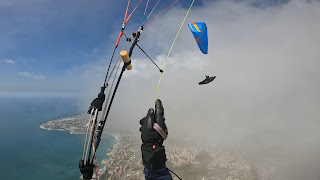 Ears can be made with the outer A’s, they flap a bit but ok. They are more efficient and calmer with outer B’s as they reopen quickly. The descent rate with the outer B’s is better than the Zeno 1 with more than -2.2 m/s and bar if you have long arms.
Wing overs are spectacular with the Zeno 2. You can feel the energy after the second turn, and on the third, you will find yourself above the glider facing the earth! 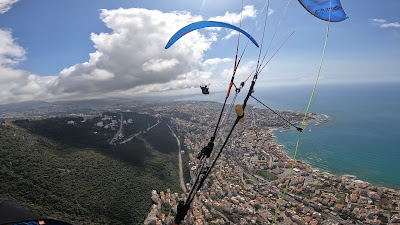 Conclusion: The Zeno2 is different from the Zeno 1. Handling has been improved, as it is shorter and more responsive, and forgiving. The stall point is hard to get. It is just underneath the hips. It gives slight information before it stalls. It can be slowed on a narrow top landing with keen attention.
More trim and top speed, more homogenous feel, better glide at bar, better into airmass efficiency. I wish that the climb in weak thermals stayed the same but flying it 5 kg less than the top weight will solve it slightly.
The Zeno 2 is an efficient XC and comp machine with a high degree of accessibility for the top performance 2 liner pilots and could be a logical evolution for experienced 3liner D pilots who want to upgrade.
Posted by Ziad Bassil at 8:21 PM

The current production time is approximately 192 days from order to shipping (updated daily). Contact your dealer to place your order.

* noch ausstehend * Weights may vary up to 50gm per size due to slight variations in the manufacturing of the fabric used.